Travod and how to win your client's trust... 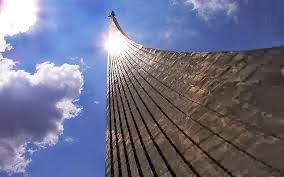 Some readers of my blacklist have suggested that companies should be categorised better rather than be simply listed alphabetically. My criteria for now is just who I would not work for and why. They suggest I should classify them by country, and separate bad payers, from non-payers and low payers. This sounds like a great idea and I have studied that possibility but found it is not very practical to start such categories, because some people belong to all of them and there would be repeats.

Travod is one of them. They have positive reviews as well a bad ones, but I would personally not work for them because they offer low rates (under 2 eurocents). And on these grounds alone they are damaging the industry by lowering the standards (read article about the main factors threatening profession).

On top of that, their strategy to gain trust from clients is to pretend they are an international company based everywhere. There is nothing illegal about that, and they are not the only ones to do it, but it's definitely very embarrassing for them. And they go through a lot of efforts to hide the following information. Here is the story:


I mentioned in the blacklist a report from a French translator arguing that their French address was a church and that they did not even belong to the registry of the Chamber of Commerce in Paris:


"I made a translation for Travod. It took 12 days before I received an answer to my many reminders asking if the translation was fine and for a PO# so that I could invoice them. They replied that all needed info is published on their website www.travod.com Checking the website it says that they have offices in Paris at 44 boulevard des batignolles. After checking at this adress there is only a church!
Moreover, I checked the French chamber of commerce and there no company called Travod registered in France.
So beware, personally I will never work with them again and I should feel lucky if I ever get paid for my translation"

Shortly after the publication of this info in my list, Travod removed the "Paris office" from their website and sent me 2 mails, arguing that none of this was true and that they should not be part of my blacklist.

Here is our exchange:


"Hello,
We would like to ask you to remove us from your blacklist of translation company. The information given there is false and disrespectful!
We request it to be removed immediately!
TRAVOD Team


In order for you to see that you post false information:
1) you can check our website, we don't pretend we have an office in Paris, http://travod.com/contactus/ (Well, not anymore anyway, oh those lying freelancers)
2) Yes, we do have an office an operational office in Moldova which helps to reduce costs, but we NEVER hide that. (Why not say it's their main office, what's wrong with that?)
3) We have registered offices in UK and US.
4) FYI, you may check some more references:
http://worldblu.com/awardee-profiles/2013.php#travod
http://www.atanet.org/onlinedirectories/tsd_corp_listings/tsd_corp_view.pl?id=1032 (Irrelevant employee recommendation and a ranking in some obscure business list)

Please forward the evidence from chambers of commerce that you have offices in the UK and NY and we'll take off that information.

In the meantime, I checked all this myself before they modify their page again, intrigued by this new comment on LinkedIn, from another freelance translator:

"I just wanted to confirm that Travod seems to be pretending to operate in the US while actually being in Moldova. I live in New York City where their offices are and thought I would drop by their office at 244 5th Av., which is supposed to be their HQ (according to their contact page). I have photos showing that no such office exists there. 244 5th Av. is the location of a company that sells virtual offices (nymail.com), which is basically a mailbox and forwarding service. It seems that many fraudulent/scam companies work out of this address. I called the office to ask about this and the person on the line told me that she was in the office right now, which was highly unlikely. I did contact proz.com about this and they told me that they would look into it, but it doesn't seem to have changed anything. To be fair, my experience with the company has not all been bad(...)" Read rest of thread


Now, even without saying the above is true, one has to admit it is very believable given the previous comments in the thread. There seems to be some pattern emerging here.

So what Travod really does is rent virtual offices in major cities for about 20 dollars a month. Whether or not they have actual offices in these places does not really matter anyway to me, they are still staying on my list on the sole grounds of the rates they offer.

But the question of where these companies are truly based remains interesting because it's about deforming the truth playing on words and constructing a business facade. And that deserves to be known more widely.


Here are the facts now to backup those mean allegations. Travod's homepage will leave you under the impression that it is situated in the USA, New York more precisely. Skyscrapers, yellow cabs, ATA (America translator's association) logo in a privileged spot, as well as a little boy playing with a dog on a beach (?) to give its viewers a cheap heart-warming feeling.

In the contact page, their first address is NY, their last one, segregated by a blank, is Moldova. 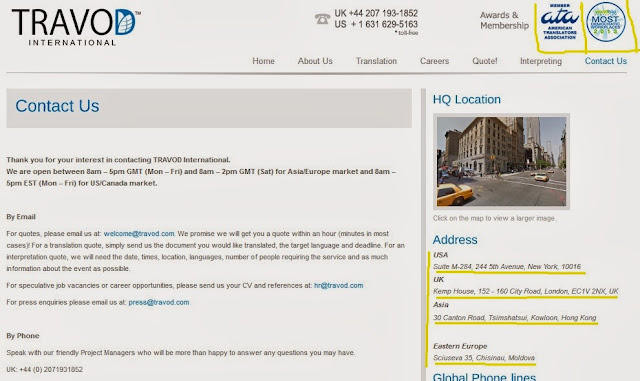 As it turns out, they don't seem to directly employ anyone in NY, Hong Kong or London. They pay, along with other companies, for a virtual office and mail service, some private company to take care (pass on to them that is) of anything landing there. Actually they probably never physically engaged in any sort of activity in those places. And that is the beauty of these so-called "virtual offices".
Never heard of them? Me neither until yesterday. I just think it's brilliant. Borderline unethical, quite embarrassing, but allowed, definitely not illegal. And there is a need for it.


Now here is some information which confirms that these translators are right. Here is what comes up when checking the addresses for New York, followed, if you still have doubts, by pic of the door with names of the companies located at this address, proving that Travod isn't one of them: 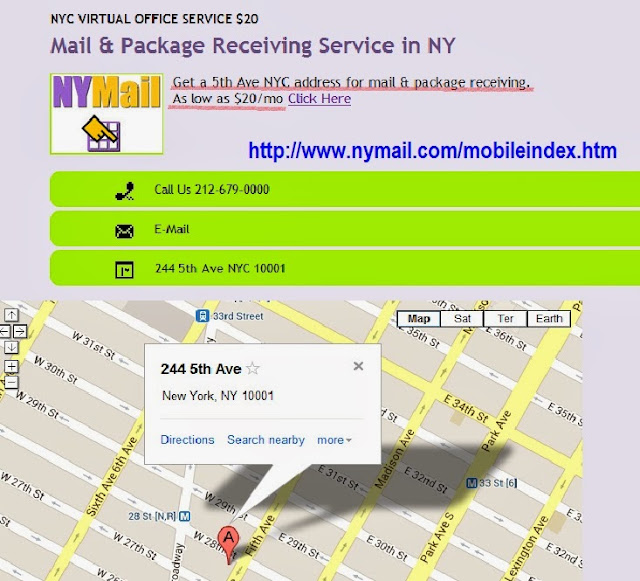 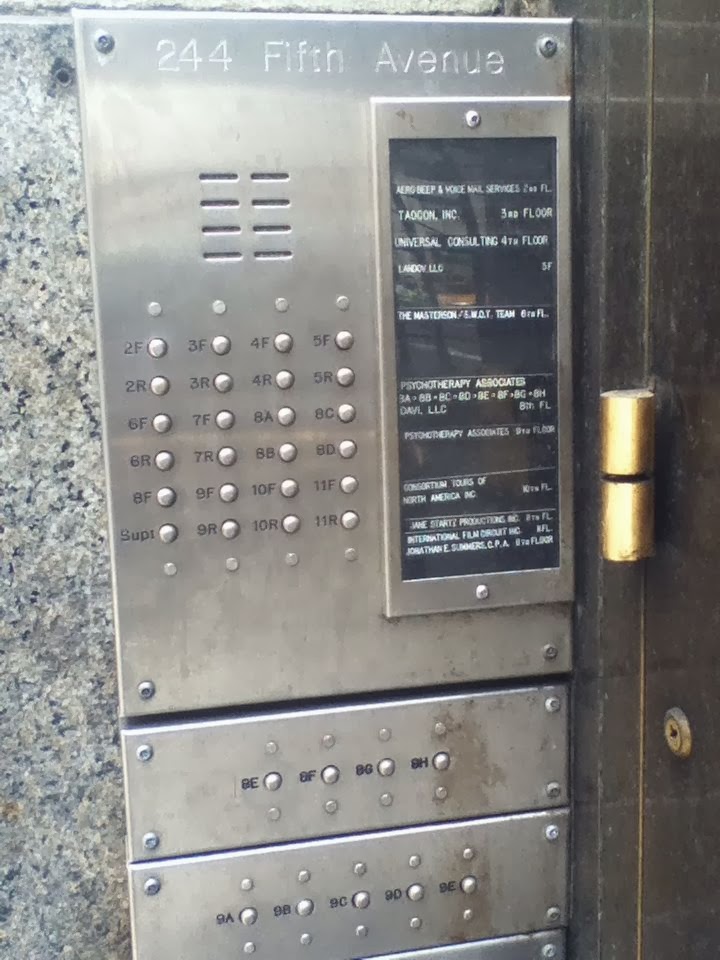 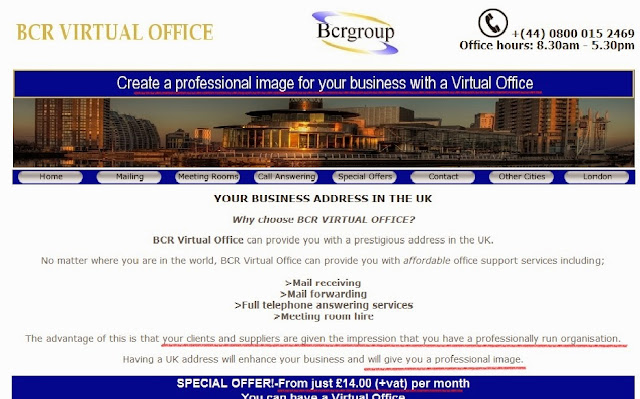 BTW I love this sales pitch, it's just brilliant: "The advantage of this is that your clients and suppliers are given the impression that you have a professionally run organisation."
...Because let's face it, if you need us, you must be a bit of a joke. Brits are so witty :) 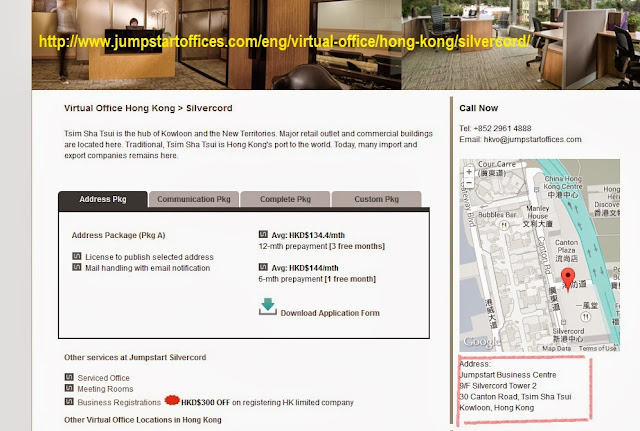 As for Paris, it has disappeared from Travod's new homepage. But their old contact page (that they did not remove properly) and Translator's Café profile, the yellow pages, and Proz page all confirm that they were lying in the email they sent me - and here it is again:


"In order for you to see that you post false information:
1) you can check our website, we don't pretend we have an office in Paris, http://travod.com/contactus/" 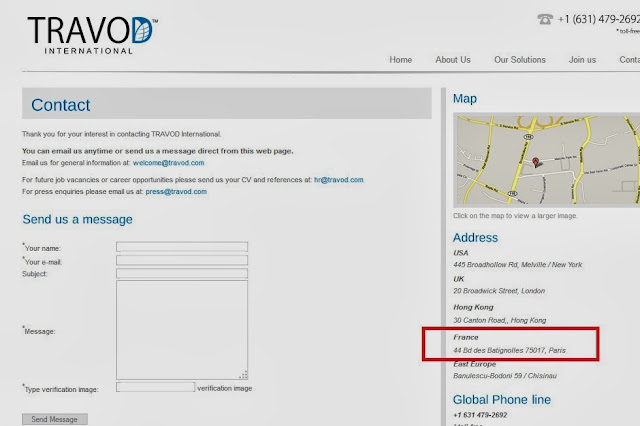 So the only office left is therefore Moldova, their only non-virtual office. Something tells me that's where they truly dwell, so I did not bother checking. There are limits to my awful, disrespectful nosiness :)

But in any case, what is wrong with Moldova? This seems like a nice enough country. Ok they don't have yellow cabs and skyscrapers but they do have children-dogs friendships, and that is the main thing, innit? 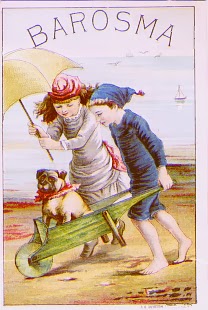