In 2013, translations are STILL HUMAN-MADE. All true professionals will tell you that despite the technological progress, no program has successfully yet managed to produce a translation one can pass for the product of human intelligence. This is simply impossible. In the meantime I'm still waiting for someone (or rather something) to prove me wrong.

This cliché is probably the result of poor communication by translators about their activity, as we fail to convey the message loud and clear. We are meticulous workers, we don't just come up with those sentences as we type them down at a record pace. We research extensively, hesitate, and choose. As humans we can indeed make decisions computers cannot make. We feel the subtleties of language and the complexity of each sentence. We try to convey metaphors and figures of speech, or double meanings and irony, subtleties programs will not even spot in the first place. Finally we read those translations to ourselves and hear their melody. We are therefore irreplacable. 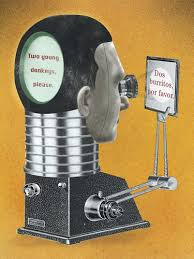 Agencies find us work sometimes, and keep a substantial commission, with little or no transparency. Without information, we are often incapable of negociating with them. We fight blindly and the risk of loosing everything is generally pretty high. The problem is, agencies often forget who's doing the bulk of the work. Finder's fee is normal, as long as we can make a living. But nowadays, our share of the cake is being drastically reduced by middlemen negotiating unrealistic targets and budgets with their client, and in consequence passing the burden to us and involving us in those risky schemes.

The rise of global competition has put our profession in peril, since we are not able to survive at the rates practised today in the industry, imposed upon us by brokers exploiting intellectual work that they trade as a random commodity.

Big work platforms like ProZ have promoted that downward spiral of rates by letting anyone offer bottom rates and any so called professional apply for those "jobs". Those websites are ruining our business by acting against the profession. They are getting paid by translators to represent them but instead treat them like service providers rather than clients. They are not willing to defend our interests, refusing to set a minimum rate under which a recruiter is not allowed to advertise. Besides, there are serious doubts about the transparency of their Blueboard, a rating system which reflects in no way the reputation or good practises of agencies. I paid the membership one year and this for me was a total waste of money. I never get replies from any recruiter via Proz. The only job I found on it was when I was not yet a paying member.

According to SFT (survey in French) and the ATA, the average sustainable rate per word for a professional living in the EU is 12 Euro cents. Most job offers on ProZ target a budget comprised between 1 and 5 Eurocents. No translator in Europe can survive with those rates. Their hourly production is on average 250 words, so their rate per hour would be 5 euros, before tax. A professional working legally pays at least 25 percent tax. Therefore, if he or she accepts a 2 Eurocent offer, the remaining hourly salary is 3.75 euros per hour. Exciting isn't it?
Other threats to the profession :
It is only with the cooperation of translation buyers willing to ackowledge the importance and value of quality translations, and ready to pay them for what they're worth that this beautiful profession can be salvaged.
The translation market, despite its apparent health and growth, is actually collapsing, while with it, language, intellectual rigor, and overall quality of communication are endangered.

Published by Translationethics at Thursday, September 12, 2013
Email ThisBlogThis!Share to TwitterShare to FacebookShare to Pinterest